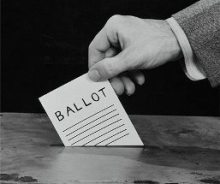 The vote between the gun and the relic wasn’t that contentious — unless you count all of the angry pro-gun comments I received on Twitter and in email. Hilarious. In the end, the votes stacked up like this:

This Friday we will seek salvation in the relic. Hope it delivers. (See what I did there?)

My favorite part of this series is all of the awesome comments and votes, the hilarious banter on twitter, and the overall enthusiasm for the story. Or at least, the enthusiasm of knowing your vote is correct and the other side is wrong!

My absolute favorite votes for The Relic Part Six are:

Jimmy: Center mass, center mass! A… It’s just like the alamo! Don’t fire till you see the … smoke… of its chest smears…. Not the same poetic vibe.

And this made me laugh out loud:

Steven Montano: B!!!! Grab that relic and shove it up that demon’s nether regions!!!! (Then, if I’m still alive, I’ll grab the gun and empty it into the demon’s corpse. Naturally I’ll be holding the gun sideways, Gangsta style, and calling the demon “my bitch” the entire time.)

Dustin Ashe: Stabbing it in the eye with the bone would work. “You’re boned!” or better yet “For you, there’s no to-marrow!”

You guys crack me up. 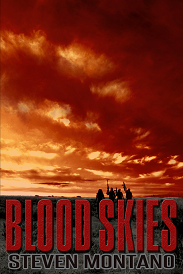 And now for the Blood Skies giveaway! I got a little excited and decided to give two copies this week. Each comment was assigned a number with Twitter votes numbered last. The random number generator went to work and picked our winners:

Unfortunately, ShouldBeWorking used an invalid email address so they are disqualified. (Sorry.) We rolled again and the second winner is…

Congratulations Gene and Amber! Please send me your email addresses through the “Contact Me” section (or DM me on Twitter) and I will send your new copies of Steven Montano’s Blood Skies.

We’ll do more of these giveaways in the future. I think it’s a fun way to say thanks to all of you for participating and supporting me. It also supports indie authors that I love, so it’s win-win.

This Friday, I will reveal The Relic finale! After the story wraps up, we’ll take a break – but don’t worry, we’ll come right back and start up a new Vote Your Adventure story.

In the meantime, Mark Lidstone’s zombie VOA story is really revving up. I noticed a lot of our group went over and voted on last week’s segment. Thanks a bunch, guys. You do me proud. If you’re feeling action-deprived, head on over and take a look at this week’s offering: Black Friday. It’s a little long and pretty freaky (zombie fingers in your mouth… eew) so pull up a seat and make sure the lights are turned on.

I’ll see you this Friday for the grand finale of The Relic.