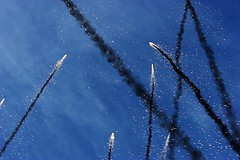 This is the finale of an adventure series where YOU determined the next step in the story. Read part one, part two, part three, part four, part five, and part six.

The vision has ended but you still feel boils on your skin and the sting of poisoned air in your nostrils. You know could save the world but the vision you saw isn’t salvation. You decide it’s better to set the Second Rider free.

You turn toward the control panel and scan it, looking for a lever or switch to send the silo to the surface. The tracker retreated to the far side of the room but you feel her eyes on you now.

“What are you doing?”

You hear the horror in her voice and turn toward her. Your eyes lock. Hers widen.

You decide not to say anything. It’s clear that she knows what you’re about to do. You look away and step toward the console.

You don’t. You’re determined this is the right thing to do. You hear an excited rustling of wings. Out of the corner of your eye, you see the tracker’s rifle swing upward and point in your direction. She’s staring at you through the gun’s sight.

“It’s the right thing to do, Lozano. Keeping the Rider locked up isn’t going to save anyone.”

She stares back with an incredulous look and shakes her head.

“Put your weapon on the floor and back away from the console.”

You’re close to the console but you don’t think you could make it without getting shot. You set your rifle gently on the floor and step back to the wall by the office chair.

As Lozano walks over to your discarded weapon, she keeps her sights on you. She kicks your rifle toward the door. She then starts walking backward toward the console.

You wait. Eventually she’s going to have to turn away and look for the lever that will send the Rider back down.

Lozano renews her grip on the rifle, holding it at a comfortable position. Reluctantly, she takes her eyes off of you…

You grab the office chair and shove it, sending it flying across the floor at her. Lozano looks back as the chair nears. She fires her rifle erratically, blasting a hole through the chair and into the wall to your right. You duck down and charge. She tries to get off another shot but misses again. You slam into her legs and knock her on her back. Her rifle clatters away a few feet to the right.

You scramble to the rifle, grab it, and jump to your feet. As you turn around, you see Lozano is running toward the door, heading for your gun. You fire a warning shot into the ceiling.

She stops. Her hands go up in surrender and she turns around. Her lips are pinched in a taut line.

She sends the gun sliding toward you and says, “Don’t do this. If the Rider turns us against each other, we won’t have enough manpower to fight the real fight.”

Her voice is muffled. There’s a strong ringing in your ears. You assume it’s from the gunfire. It’s strange that the rustling of feathers is loud and clear.

Your eyes flicker toward the console.

“Listen to me!” she screams. “Of course he showed us a terrible future. He wants to be set free!”

Movement on your belt catches your attention and you both fall silent. All of the metal tabs are pointing right at her.

The sword is in the hall behind her.

Her eyes fall to your belt, then back up again. She looks terrified. Her voice is a whisper.

Slowly, she starts to turn.

She turns her back to you and the lights begin to dim. She screams.

You act on instinct and raise the rifle. You put Lozano’s head in your sights and pull the trigger. Her head snaps forward. Blood splatters heavily against the wall. Her lifeless body falls forward and collapses on the floor before the black sword.

You stand there, staring at the scene in the hallway. Lozano’s words replay in your head and, for a moment, you wonder if she’s right. Should you not set the Rider free?

The sound of rustling feathers breaks through your thoughts and your doubts fade. You lower Lozano’s rifle and walk to the control panel. You quickly find the lever that sends the silo up to the surface and flip it up. You hear heavy machinery humming somewhere below. As the silo begins to move, its sides grate against the ceiling, removing the remaining symbols. The Rider is free.

You look back at the hallway. The sword is gone, probably to meet its master on the surface. You cast another look around the room and notice a door on the far side that’s just around the bend of the silo. You run to it and throw it open, revealing a staircase going up.

You take the stairs two at a time and quickly find yourself back on the main floor. You sprint down the hall to the first hatch. At the foot of the metal stair is another dismembered foot. You kick it aside and climb up. You throw open the hatch.

The full moon is directly above, casting a bright, bloody light upon you. Smoke is thick in the field.

They emerge from the smoke together: a humanoid, larger than any demon you’ve seen, atop a massive red horse. The Rider wears ornate black and silver armor. Silver wings unfold as if out of nowhere and expand across the clearing, then quickly retract and disappear. The black sword is in his hand. Flames flicker around the horse’s hooves. It leaves ash and soot in its wake, turning the flora black. The Rider stops at the hatch and stares down at you with his fierce, ruby eyes.

You know you were tricked. The world probably would have been bad, but not nearly as bad as the Rider showed you. Anger swells in the pit of your stomach. The Rider nods at you almost apologetically. There’s nothing you can do to stop him by yourself and there are no words to aptly express how you feel in this moment. Only one expression comes close:

You give him the finger.

The Rider’s eyes narrow. He jerks the reigns and kicks the red horse into action. The sound of hooves on the forest floor is like thunder as they ride away.

For the next six hours, you sit on the edge of the hatch with the dirty dismembered foot you found earlier. You stare upward, watching the night sky light up with rockets and gunfire. The next stage of Armageddon has begun.