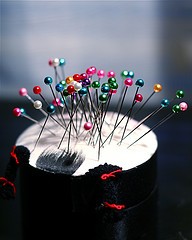 Step aside models and heartthrobs, it’s time to announce the Sci-Fi Pinups of April 2012!

This is the time of month when we cast our gaze upon deserving hotties from the Sci-Fi universe — these ladies and gents aren’t what you’ll find in your favorite Hollywood gossip magazine, and they certainly won’t be found in a swimsuit photo shoot. Science Fiction studs and studettes are of a completely different caliber, and are weighed by more than their looks and “assets”:

It’s about the size of their guns. Duh.

So let’s get started!

There’s no doubt that a good sci-fi woman is hard to find. Many women in the genre are busty helpless nitwits, waiting in the wings for a strong man to solve problems and shoot things.

Thankfully, Miss April will happily backhand those bimbos into the next galaxy. She’s brave, ambitious, and can kick your ass. Her turn-ons are big guns, shooting things, and invading alien-infested installations. Her biggest turn-off is being mistaken as a man. She is… 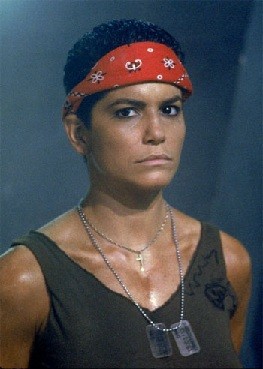 I really appreciate Miss April because women don’t have a wide selection of strong females to look up to in the sci-fi universe. Vasquez is a lean, mean fighting machine who can show the men how it’s done. Miss April has serious survival skills.

Correction: had. She was doing just fine in the “staying alive” department until that nasty acidic blood/grenade incident. Still, she took it like a champ!

If you plan on taking Miss April out on a date, prepare to wear the dress. Because someone has to wear one and it sure as hell isn’t going to be her. Congrats again to Miss April!

And now for our Mr. April. Choosing Mr. April was incredibly tricky because we wanted hardcore machismo that could stand toe-to-toe with Miss April. We wanted an explosives expert, a soldier full of testosterone.

It wasn’t easy, but we found him.

Mr. April is tougher and braver than the competition. He’s always prepared for a fight and isn’t afraid of a little insubordination. His turn-ons are big guns, shooting things, and invading alien-infested installations. Turn-offs include sergeants who think they can take your ammo away. He is… 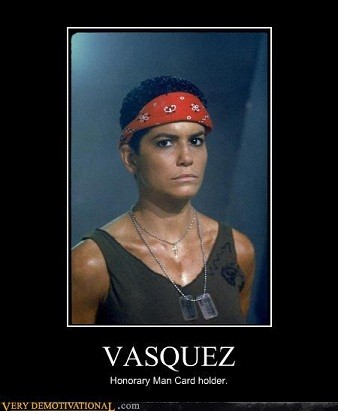 I’m not taking it back, but I will offer up a bonus: the Mr. April Runner Up!

I hope you enjoyed this month’s pinups. What do you think? Leave a comment below and let me know!

First time here? Check out our sexy selections for January, February, and March.