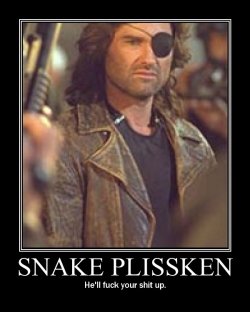 I promised some really ridiculous Snake Plissken fanfic, and I mean to deliver. Here is PART ONE of a Snake adventure called “Escape from Seattle”, AKA “Snake Goes To Starbucks”. Enjoy!

It’s 2:00am. The streets of Seattle are pitch black and lonely, save for the occasional, near-burned-out street lamp casting pools of dim, yellowed light on the asphalt, and a 24-hour Starbucks on every corner and squeezed into the spare square footage of every bank, gas station, and grocery store. A lone man stalks the sidewalk, his black leather pants and matching wife-beater blending with the darkness, and his long, feathered hair rustling gently in the breeze. One eye squints dubiously at the Starbucks. The other is hidden behind a black eyepatch.

The man marches straight through the Starbucks parking lot and jerks the door open. Inside, a long line of customers trails from the register to the door and doesn’t seem to be moving. The man charges forward, shoving college students and hipsters aside. Their screams fill the air as they’re tossed to the ground or into large displays of organically grown, free-trade coffee beans. He charges toward the front, his mission urgent: Snake Plissken needs a latte.

The green-aproned barista behind the counter smiles stiffly and wets his pants. “Welcome to Starbucks. How can I —”

The black-clad man’s arm is a blur as it shoots forward and grabs the barista by the collar of his shirt. He leans in closely.

“Grande. Triple shot.” He releases he barista and shoves him back to the other side of the counter. “And make it soy milk,” he growls.

The barista grabs a cup and a black Sharpie. “What name should I put on your drink, sir?”

The barista grimaces slightly but doesn’t question. He quickly scribbles the name on the cup. “Yes sir, Mr. Snake, sir.”

Snake slaps a five-dollar bill on the counter. “Keep the change,” he mutters, and walks to the opposite end of the counter.

Snake’s coffee order is rushed out and set on the counter. The barista calls out, “Grande latte for Snake.”

Snake picks up the paper cup. He pops the top off and checks for the appropriate amount of foam. He sprinkles a small dash of cinnamon on top. He presses the plastic lid back on and takes a long, slow sip.

His latte is delicious. He sneers his appreciation.

As he turns, a figure catches the corner of his lone eye. He whirls around. His eye narrows angrily.

A tall, slender man with a cone-shaped, balding head emerges from the back room.

“I’ve been waiting for you, Snake,” he says.

“I have a job for you. I’m now the manager of this Starbucks and we’re out of sugar-free vanilla syrup. We’ve poisoned your latte with military test virus X2P-4ZZ and, if you don’t retrieve a couple of bottles in the next 25 minutes, you’ll die.”

The two men stare each other down for a few seconds.

“I’m not going to fall for that again, Hauk. My latte tastes delicious and I know I’m not poisoned.”

Hauk fingers his short, trimmed mustache deviously. “You’re right, but I do know your stomach has trouble with lactose — and we switched your latte to whole milk.”

Snake looks at his latte in horror, then back up to Hauk. “You don’t mean —”

“That’s right, Snake. In 25 minutes, your tummy will be upset, and you’ll need something to settle it. So you may as well pick me up some sugar-free vanilla syrup while you’re out.”

Hauk smiles and pulls from his pocket yet another enormous digital timer with a wide Velcro strap. The timer is counting down from 25 minutes. Snake shakes his head and takes it, then slips it on his wrist.

“There’s another Starbucks two blocks from here, Snake. Your mission is to get the syrup and get back here as soon as possible.”

Snake starts toward the door.

“Wait.” Hauk pulls a red credit card from his back pocket. “I almost forgot. Use this to pay for the syrup.”

Snake takes it and holds it up. His face puckers in an angry scowl.

“A VISA gift card? These things are a pain in the ass to use! You have to put in the exact amount, minus the fee — what’s the fee on this card?”

Hauk shrugs. “I don’t know. The math is your problem, not mine.”

“Asshole,” Snake mutters, and stalks out the door.

In the parking lot, Snake scans the area for a fast ride, but finds himself surrounded by hybrid cars painted in bright green and blue. These won’t do for Snake, and not just because they don’t match his black leather wife-beater — Snake can run faster than a hybrid.

So he does. Choosing the most direct route through the parking lot, Snake breaks into a dogged jog toward the street. He hurdles a yellow bicycle, wedges himself through a smooching hipster college couple, and slides across the hood of a green Prius covered in Phish bumper stickers. He lands gracefully on his feet and jogs into the middle of the street. Snake stops and looks both ways.

He realizes he isn’t sure which way the other Starbucks is.

Snake jogs back into the parking lot, slides back across the green Prius, and grabs both of the hipster college kids by their throats.

“Which direction is the next Starbucks?”

The kids point in opposite directions. Snake’s eye narrows. His voice resonates with a low growl.

“You better not be messing with me or I’m going to make you sorry.”

The girlfriend nods her agreement.

Snake releases the two kids and stalks back to the center of the street. Then he changes his mind, returns to the college kids, and gives the hipster boyfriend a big bitch slap across the face. The boyfriend presses his hands to the side of his face and lets out a piercing shriek.

“You’ll thank me later,” Snake hisses, then returns to the center of the street. He checks the wrist timer Hauk gave him. 19 minutes left.

Snake looks down the street each way, but neither direction seems to hold a clue. He pulls a coin from his pocket. He tosses it in the air, watching it soar six, seven, eight feet high, then drop back down to earth. Snake catches it in one hand.

Instead of looking to see which side of the coin came up, he chucks it as hard as he can toward the hipsters and hears another high-pitched squeal. Snake Plissken is a badass who doesn’t need that hokey fate crap. He turns to the right and starts to run.

As he approaches the next corner, he notices that the lights here are brighter than on previous street corners, and the sounds of voices and cars are louder. He jogs into the center of the intersection, causing a three-way car crash that he barely notices. Snake stops and casts a quick glance around the intersection. He scowls.

There are three Starbucks in this intersection, and Hauk didn’t give any more clues. Snake checks the digital timer on his wrist again. He only has 16 minutes left.

Which Starbucks will Snake Plissken choose? Will he choose correctly? Will he make it back to Hauk in time? Tune in next week for PART TWO of “Ridiculous Fanfic: Escape from Seattle”!