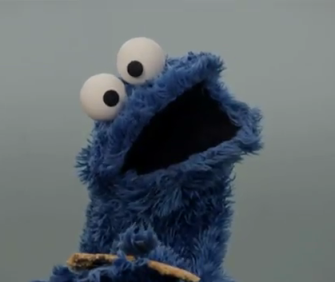 Sunny days can’t sweep these clouds away. The once-friendly neighborhood of Sesame Street, where doors are typically open wide, has been rocked by scandal. The residents of Sesame Street have lived here for many years and have come to know each other very well — or so they thought. As it turns out, one resident of this sweet-smelling neighborhood has been keeping a terrible secret.

Neighbors have noticed Cookie Monster’s frequent trips late at night, supposedly to pick up cookies. And though stores on Sesame Street close promptly at 6:00 PM, residents were just too polite to ask Mr. Monster what he was up to. The rumor mill was hard at work trying to guess what the late jaunts were about. But no one could have guessed what lies lurked beneath the smiling, furry blue exterior. In fact, one resident had to see it for himself.

Last Friday, an unnamed citizen followed Cookie Monster during one of his alleged “cookie-replenishment” trips. But instead of ending up at the local bakery, they ended up at the last place he/she expected — the Sesame Place Hotel.

After Cookie Monster checked into room 12, the citizen crept up to his hotel window and peeked through the partition in the curtains. And, according to the citizen, the scene inside could only be described as “shocking” and “savory”:

Mr. Monster was having a secret rendezvous with muffins.

No one is sure how long the secret affair has been going on. A publicist for Mr. Monster called it a “momentary indiscretion,” though friends fear it has been going on for a very long time.

A friend of Cookie Monster, speaking under condition of anonymity, said, “After all of these years I thought I really knew him. But I saw photographs of him eating three! Three muffins! Muah-ha-ha-ha-ha! I guess I did not know him after all.”

Now that the truth of Mr. Monster’s secret life is public, residents of Sesame Street are shocked and saddened. Some wonder if things will ever be the magic-carpet ride they remember. The community has been shocked to its very core and few know how to cope with the scandal. According to residents, Bert kicked Ernie out of the house, Mr. Johnson is getting great customer service everywhere he goes, and Oscar the Grouch has started recycling. But that doesn’t mean time can’t heal these wounds.

In a press conference this afternoon, Cookie Monster released an official statement expressing his feelings about the situation:

A spokesperson for the Keebler Elves was unavailable for comment.