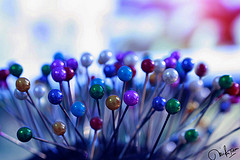 Stop your grinnin’ and drop your linen—it’s time for the Sci-Fi Pinups!

If this is your first time joining us, welcome! This is the monthly segment where we celebrate the hunks and hotties of the science fiction and fantasy world—the strong men and women with the guts, guns, and green skin to prove they’re the best and baddest. They ain’t your momma’s pinups.

Unless you have my mom. She’s pretty awesome.

For more pinups, check out our previous submissions.

Since I’m late on the pinups once again (gah), let’s just jump right into it!

Miss November hails from good, normal British stock—and don’t you dare look down on her for that. She’s loyal, brave, and is a fast draw with her wand. She can do everything a boy can do, except figure out a magic spell for manageable hair. When you’re in a jam and don’t know how to get out, never fear—her love of libraries has made her brain an encyclopedia! There’s never a problem she can’t solve with her books and big noggin. But before you scream, “Nerd alert!” let me assure you that she’s seen quite a few fights and never backs down from anything or anyone. The only thing bigger than her heart is her patronus.

If you’ve never heard of Miss November, you must have been living under a rock for the last fifteen years. You should make yourself acquainted with our Miss November immediately! She’s strong, she’s brave, and she’s smart—everything we like in our sci-fi ladies. None of that whining, crying, hiding under the bed for her! And if you try that kind of behavior in her presence, she’ll pull you out by your hair and turn you into something awful. Believe me, she can do it.

Here’s a little more in case you can’t get enough of Miss November:

Mr. November comes to us from Astoria, Oregon. Like Miss November, he’s locked and loaded and always packing for a fight. At first glance, you’ll think he’s dressed like a young flasher-in-training, but once he shows you what he’s packing under his trench, you’ll change your mind faster than you can say “Pincers of Peril.” When the chips are down and his crew’s in danger, he’ll stand in the gap and whip out his contraptions. Hopefully they won’t punch him in the face first. Mr. November sticks with his friends to the end and never says die.

…Data from The Goonies!

I realize this movie’s super old and you probably haven’t seen it in a long time, but it’s so good. And Mr. November is great! He uses his brains and his heart to overcome adversity… and score some pirate treasure.

In case this just isn’t enough of Mr. November for you (of course it isn’t!) here’s a little more:

Thanks for joining me for another month of Sci-Fi Pinups. I hope it brought you a little smile. If you like what you see and want a little more, pick up a copy of my bestselling comic urban fantasy novel, THE FOURTH CHANNEL.