Back in March, I said my 2018 mantra was “Action Creates Inspiration.” Looking back, this has been a significant year. Although I’ve been quiet about my writing progress and overall life developments for this year, I’ve had a fairly productive 2018. I transitioned into a new job, which has given me a lot more bandwidth for the things I love.

Honestly, the past twelve months have felt like creative rehab with a twelve-step program. I’ve been writing more than ever before, I learned a lot about my own writing process, and I created tools and methods that work.

But the most effective thing I did? I got myself a goal buddy.

Every Monday, my goal buddy and I email each other with our updates. We encourage each other for the week ahead and state our goals for the new week. I’ve heard many people say that accountability has been key to their success and progress. I always thought it was crap… until now. Maybe it’s because I’m super competitive and I don’t like failing..? I don’t know. I just know that I do not want to be the person who emails every week to say they sucked on their goals.

Which means I have some books coming out in 2019.

I know. When I realized it, I was kind of shocked, too! And excited.  Definitely excited. Hopefully the work I’m doing now will get my book production into a working rhythm. I’m really looking forward to seeing what I can do in 2019, building on what I’ve done this past year, building on the actions that have created my writing inspiration. And that will mean a new mantra for 2019: “Chase What Energizes You.” 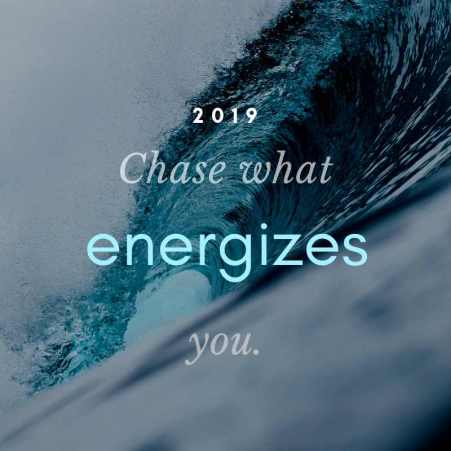 I can’t take credit for the mantra. I got it from motivational speaker Mel Robbins who was talking about people finding their purpose in life. In short, she says: Don’t. Instead, chase what energizes you. And for me, that’s writing.

I’m cautiously optimistic that I can maintain this momentum going forward, especially because all this hard work (action) means you’re going to see two books and a novella in 2019.

The Fourth Channel, Second Edition: It’s already gone through one editor and now we’re waiting for the Spouseditor to wrap up edits on his end. It will come out with an updated cover. If you’ve been to my website in the last few months, or have seen my Twitter or Facebook pages recently, you’ve probably already seen it:

What’s different about the second edition is that the first few chapters are rewritten and rearranged. It’s different, but the same. I’m excited about it, but that’s a given: if I didn’t love it, I wouldn’t let you read it.

After the new edition of The Fourth Channel is released, we will release the second Kari Hunter book, which is called…

I know. I’m excited, too. I have a cover for it and everything.

I’m currently wrapping up the last five chapters. I need to make one more edit on the whole thing, and then I’m sending it out for edits. We’re employing an external editor this time around so I’m not sure how long it’s really going to take. She’s pretty fast, but throwing a professional editor into the mix is a first for me and the Spouseditor, so bear with us while we work out the process. We expect that she’ll be doing the heavy lifting in the editing process, and then the Spouseditor can wrap up with the proofreading and whatever comments he has.

And then I’ll work on a standalone novella. I’ll have more information about that next year. Right now, I want to put all my focus into finishing the first two Kari Hunter books.

I’ll also do a cover reveal for The Necromancer’s Knives next year so I can have more to blog about. And yes, now that I’m getting into a real rhythm and I expect to be releasing books more regularly, I’ve made it a major goal to keep my blog somewhat updated. If you want to connect with me even more, you can find me at my Twitter and Facebook links (look to the left!), and hey — I’m now also on Instagram!

Anyway, let me wrap up 2018 with a retrospective thought: I’m not going to make another sweeping statement about how I’m going to rock out tons of stories for you to read. Because we all know how slowly the last six years have gone. I’ll say that I’m relieved to be in a place where I’m writing more and actually finishing my projects. Now I just need to stay accountable and chase my passion with action.